Donation to the Penticton Hospital 2019

Members of the Okanagan Treasure Hunters Club (Syd and Jo-Anne Birch) presented Carey Bornn, of the South Okanagan Similkameen Medical Foundation, a cheque in the amount of $4,100 from the money raised by the sale of WestJet raffle tickets.  This brings the donation grand total to the Penticton Hospital to more than $40,000. 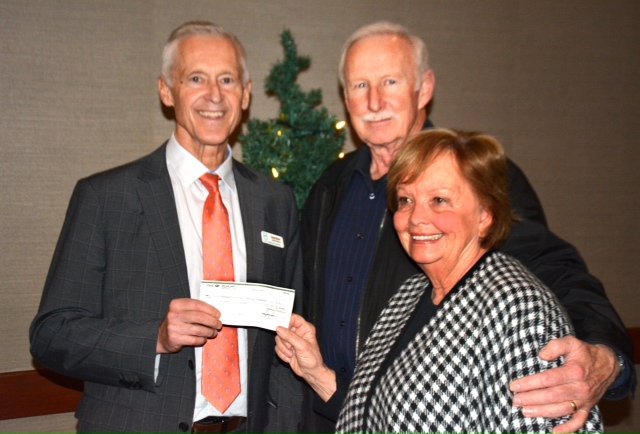 Eight club members came out for a Halloween hunt. Everyone dressed up to compete for a prize for best costume. Coins were planted on the beach, as well as tokens for a chance to win prizes. After the hunt, the members enjoyed a wonderful chili lunch with all the fixings, as well as a visit around the fire.

A few club members had the chance on short notice to go metal detect Pine Hills Golf Club in Penticton. The owner gave us a few instructions and we were off. We all found trash, some coins, golf tees, markers and balls.

A number of members ventured out again to enjoy a day of detecting at the old ghost town of Mineola near Summerland, BC.

Twelve members came out for a hunt at the old ghost town of Mineola near Summerland, BC.  Members detected for a few hours then stopped for lunch and detected some more. A few Canadian large cents were found, along with older jewelry and various relics. A snake was also seen.

Eight members and one guest came out for another fun beach club hunt.  Everyone brought a token prize and there were lots of coins and tokens for all.  Afterwards, everyone enjoyed a delicious lunch of pulled pork and caesar salad.

There was a great turn out for our first club hunt of 2019 and the weather couldn’t have been more perfect. Members participated in a seeded sand hunt with great token prizes to be won. Then barbecued burgers and hotdogs were served for lunch. Thanks to all the members who attended and helped out to make this a fun hunt.